I invited writer Chad Clark over for an interview. He very generously agreed. I've known Chad for a little while now, and he's a cool guy and talented author who works very hard. It was a pleasure to have him visit the blog. 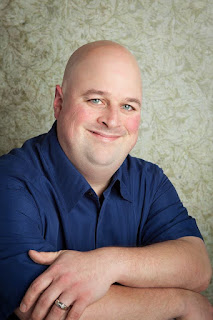 How would you describe your writing style?

In terms of genre, my passions are still for horror and science fiction. I enjoy a more casual tone to the narrative and I try to keep a fairly close proximity between the reader and the point of view of the characters. The subject matter of my stories often tend heavily towards the darker side of fiction but I also try and make a conscious effort to hold back on a lot of actual descriptions. I like to take the reader to the brink of the more disturbing parts and then let their imagination fill in the gaps that I leave behind. I also tend to be very focused on dialogue, to a fault where it seems like the story is taking place within a white room.

Which of your books/stories would you recommend as a good starting point for someone who hasn’t read your work?

The easiest way to get started on my style is to check out my blog – www.bakedscribe.net. Every week, I publish a work of short fiction – usually around a thousand words. New stories are posted every Wednesday. Also, on Saturdays, I re-post an older issue from the blog which has since been taken down. And starting this July, I will be introducing two new additions. Micro Mondays will feature a story short enough to fit into a Twitter post. Second, I will be posting monthly essays in a series I am tentatively calling, “Ramblings On The Craft”, which will consist on thoughts and opinions I have on the art of writing.


Do you have a favourite character from any of your stories?

I wrote a short story (Long Last Victory) about a failing writer, who is clearly full of himself and of talents that he likely doesn’t really have. In a last effort to try and find his success as a writer, he sneaks a story into a creative writing contest for children. The character was a lot of fun, over the top and absurdly offensive with his remarks – very much inspired by Ignatius Reilly.


What is the best piece of writing advice you’ve received?


This advice wasn’t necessarily articulated to me in this way, but one of the most important lessons I have learned as a newly published writer is the importance of patience. Publishing can be a heart breaking experience as you sit there, waiting to see reviews of your books, hoping for some sales numbers to start showing up and it’s extremely difficult to not come conclude that all of this disappointment is a result of your lack of talent. As authors, we have a tendency to look with no small amount of longing at those on the next rung up from us and wish that we could just get there ourselves. The problem is that if you ever do get to that level, you then become fascinated with the next one. And the next one, and the next. There are probably a very tiny amount of artists that have ever reached that plateau where they can feel satisfied that there isn’t really anything else they can accomplish. Don’t let the goal become too much of a source of stress and frustration. Remember that the words are what got you into this and if, in the end you do end up achieving that material level you have always dreamed of, are you really going to be happy if your entire road leading up to that has been miserable?

Who are your literary heroes/heroines?

If I look back over the years at the various reading stages I have gone through, Stephen King and Anne Rice are probably the two most consistent names that I have had on my shelves and have looked up to. I love King for his dialogue and the incredible depth he gives to his characters. I love that he takes the time to devote backstory to a character that has maybe a few pages of relevance to the story. Some likely see that as story in need of an edit but I love it when you get that extra depth to a book. And Anne Rice’s early works were regular parts of my reading rotation from about the seventh grade and on. I grew less interested in her more recent books but I loved her use of language and setting and how beautifully she could weave a story.

In general, I am a huge fan of independent writers who put their art out themselves, or via small press publishers. There’s a great feeling of connection with these people who are just trying to get their words out there in the world. It takes a lot of passion and drive to be able to do something like this so my hat is off to anyone who undertakes the adventure.


What book do you wish you’d written?

This is a tough one because I think that I would be slightly full of myself to suggest that I, in all my brilliance would be able to execute a book better than the original author. But I don’t think I would put a book that I love as an answer to this because then it wouldn’t be the book I love anymore – the idea would be there but it would be something else entirely. So I guess my answer would be a book called House Next Door. I found the concept of the book to be a very interesting take on the haunted house genre but I thought the execution was a little lacking. It just wasn’t a storytelling style that I am a fan of – where a great portion of the story is told second hand, with one character relating what happened to another, instead of putting the reader into the action.

What book are you currently reading?

The Stand, by Stephen King. It isn’t the first time I’ve read it by any means but it still is one of my favorites. Any writer who has any inclination of writing post-apocalyptic fiction should use this as their starting point. I think it’s the perfect metaphor showing how in a world fallen apart, most people will fall down one of two paths, the ones who decide to carry on, devoting their lives to each other and the community and then there will be those who choose to move on, devoting their lives to themselves.


What do you like to do when you’re not writing?

Besides being a jungle gym for my two sons, I love to read. I also enjoy cooking. I am a baker by trade and I have been teaching classes on making pizza from scratch for fifteen years.

What advice would you give to new writers just starting out in the business?

First of all, I think it’s important to not think of it as “getting into the business.” I think that it’s important to be a passionate writer before you try and become a successful author. I also think that it is very important for you to have realistic expectations regarding what you would consider success. It’s a very small percentage of people who have the talent and fortitude to write a book. Of that, it is an even smaller percentage who have the good fortune to be able to support themselves on their writing and no other source of income. Within the last year or so, I read a survey that showed 80% of self-published authors and over half of traditionally published authors were making less than $1000 a year. That’s a sobering statistic and one that flies in the face of the get-rich quick scheme that many people seem to mis-perceive in the ability to self-publish. So first and foremost, you need to make it about your passion for the words, as opposed to the income. Second, you need to take your responsibility as an author very seriously. Do your due diligence and make sure you are putting out the best product you can, don’t simply publish for the sake of getting product out there. Publish with humility, publish with fear and publish with gratitude.

What do you think of the current state of the horror genre?

Like anything else, you are going to find less positive elements that are hard to work through. There are some that are determined to just bolster themselves and do whatever it takes to achieve what they perceive as success. But there are some you come across that are genuine, amazingly generous and kind people. I think that a lot of horror writers out there are looking out for each other and I am very proud to consider myself a small part of that.

What are you working on at the moment?

The blog is usually top on my to-do list, keeping up with as regular a schedule as I can manage for putting out those stories. I’ll soon resume work on what will end up being my first full length novel. I am also starting to outline what will likely end up being a four book series although there is no time frame on that one – still in the very, very early stages.


If you had the chance to co-write a novel with an author of your choice, who would it be?

My instinct would be to say Stephen King, but being completely realistic, when would I ever be comfortable enough to look into his eyes and work up the gumption to say, “Well, why don’t we try this instead….” I think that I would like to work with authors who have achieved greatness in the profession but not so much that everything I try to say just ends up being an awkward, ejaculatory expression of how awesome I think they are. I think that Neil Gaiman would be a good author to work with, simply because he seems to have such an abstract mind and creativity that I think would be fun to work off of. And I’m sure he would have a plethora of wisdom that I would be able to benefit from as well.

Finally, are there any nuggets of info about future works you’re willing to share?

Within the next year, I should be putting out my next collection of short stories from the blog, tentatively titled Walking Yesterday’s Memories. I am also working on my first full length novel, titled Behind Our Walls. Last year, I published my debut book which contained a short story titled, Tomorrow’s Memory. Behind Our Walls is set in the universe of this story and several peripheral characters from the short are more central to the novel. I currently have a revised draft out with readers and with any luck, I will be able to have it out by the end of the year or early next.