Today marks the release of my novella THE PLAGUE WINTER from the very kind people at Infected Books. I've had to keep this a secret for the last few months, so I'm very happy to see it out in the wild and following in the footsteps of Adam Baker's KILLCHAIN as the second release in YEAR OF THE ZOMBIE, which I'm very honoured to be a part of.

It's a standalone story set in the same world as my novels THE LAST PLAGUE, THE LAST OUTPOST, and the forthcoming THE LAST SOLDIER, in which the world is devastated by an unknown virus that transforms people into mutated bloodthirsty monsters, and I had a blast writing it. Thanks to David Moody and Wayne Simmons for letting me be a part of this very cool project! 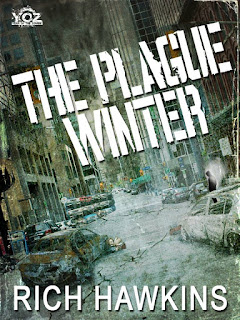 Following the devastating outbreak of an alien virus, Eddie and his young grandson struggle to survive within the wasteland of Great Britain. They live day-to-day, scavenging among the ruins, trying to avoid the deadly infected that now roam the land. But Eddie has other demons to conquer: a longstanding drink problem that needs to be kept in check if he wants to keep both himself and his young charge alive.

When a stranger enters their lives, seeking help, Eddie is forced to make a choice that could alter their lives forever.

THE PLAGUE WINTER is a standalone novella set within the same world as THE LAST PLAGUE and THE LAST OUTPOST.

‘One of the most intriguing post-apocalyptic novels I’ve read in a long time.’ (David Moody on THE LAST PLAGUE)

‘A new voice in infection fiction.’ (Sean T. Page on THE LAST PLAGUE)

‘A world of bloody, tearing violence, of pain and misery; of utter solitude, and tooth and nail survival.’ (Ginger Nuts of Horror on THE LAST OUTPOST)